What New Orleans Thinks of Its Public Schools

The Orleans Parish School Board (OPSB) has released the results of its citywide survey, and the Cowen Institute has released its report on their annual public perceptions poll. The results were very consistent between the two. 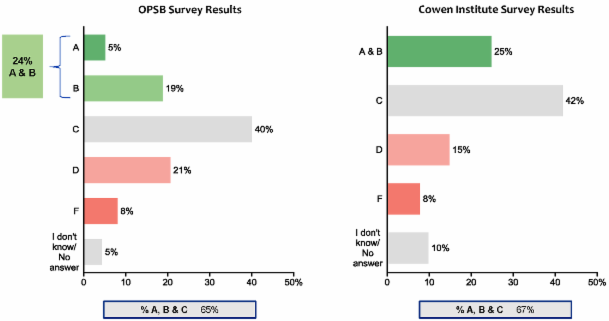 In addition, both polls showed:

The Orleans Parish School Board is calling for a special election on October 14, 2017 to renew the millage propositions that support public schools. The funds would be used as follows:

These millages generate around $40 million annually for schools (around 10% of their revenue), so renewing them will be critical for schools.

President Trump’s plans to expand school choice and his proposed cuts of $9.2 billion to education spending are generating a lot of attention, but according to K-12 advocates, they should be taken with a dose of political reality and not obscure other key education issues.

The Los Angeles Unified School District underwent a dramatic political shift this month when charter supporters secured their first-ever majority on the seven-member school board. The election became a proxy war between unions and charter advocates, with each side spending millions and making it the most expensive school board election in the nation’s history.

The $3.7 billion financing formula for Louisiana’s public schools (the MFP) has started advancing in the House. The formula doesn’t increase the amount paid per student in 2017-18, but it does earmark $18 million in new money for higher-need students and dual enrollment programs.

Critics of Superintendent John White have filed a motion in court stating he must be reconfirmed by the Senate by the end of the regular legislative session on June 8, or his post should be declared vacant. John White’s supporters say his status hasn’t changed, i.e., BESE hasn’t reappointed him, so a new Senate confirmation hearing isn’t required.

Key parts of Gov. John Bel Edward’s public schools agenda don’t have the necessary support to get through the House and Senate education committees. His plan to revamp how public school teachers are evaluated (HB 532) hasn’t gotten a hearing in the House Education Committee, and a bill that would have limited access to vouchers (SB 13) was rejected by the Senate Education Committee.

Most of the 4,300 teachers laid off after Hurricane Katrina never came back to work in New Orleans, according to a new report from Tulane’s Education Research Alliance. By 2013, only 22 percent of pre-Katrina teachers remained in New Orleans public schools.

Mary D. Coghill is the fifth charter in New Orleans that has voted to unionize. Coghill’s teachers voted in favor of union representation just before the summer break. Two schools, Franklin and Morris Jeff, have collective bargaining agreements. Lusher’s teachers rejected unionization, and International High School is maintaining they are a public entity and not required to recognize the vote.

In the early 1990s, the school board enacted a policy that opposed school names honoring “former slave owners or others who did not respect equal opportunity for all.” The Times-Picayune lists 20 schools renamed in the 90s, including McDonogh 36, which became Mahalia Jackson, and P.G.T. Beauregard, which became Thurgood Marshall.

The principal of Crescent Leadership Academy was fired last week after online video and a podcast surfaced in which he spoke in support of the city’s Confederate monuments and was seen wearing symbols often associated with white supremacy.

Superintendent Henderson Lewis Jr. recommended OPSB deny the charter application of New Harmony High, a school focused on training students for careers in coastal ecology. He said organizers should apply to the state for a Type 2 charter instead, so students from across Louisiana could attend.