p The state just released the 2014 ACT scores for public schools. Continuing our By the Numbers series, Educate Now! takes a look at high school performance.

The growth in ACT scores comes even as the percentage of seniors taking the test has increased significantly. (The state now requires students to take the ACT as part of high school accountability; in 2005, students were not required to take the ACT.) Since 2005, as the percentage of seniors taking the ACT increased, New Orleans improved its composite score1 from 17 to 18.4, while the state declined from 19.8 to 19.2. Both RSD and OPSB have seen gains in their ACT scores2.

The percentage of our graduates eligible for a TOPS scholarship increased from 25% in 2005 to 37% in 2014.The Louisiana TOPS scholarship program offers free in-state tuition to graduates with qualifying ACT scores, Grade Point Average (GPA), and the necessary academic credits.

New Orleans’ graduation rate3 has increased dramatically while the annual drop out rate has plummeted. 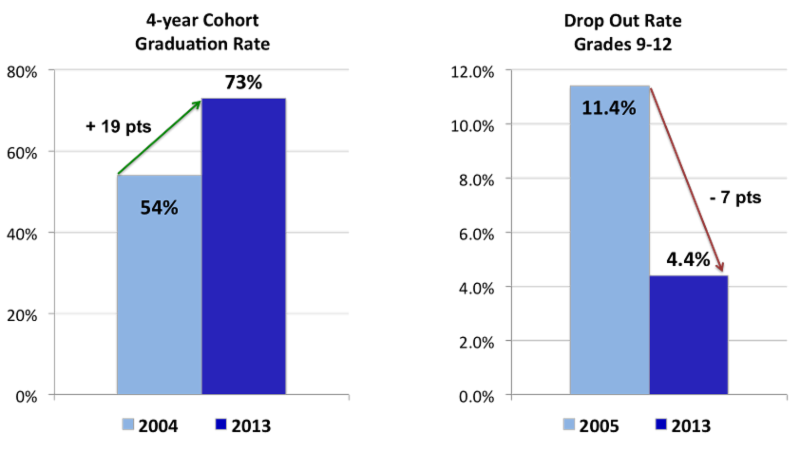 Educate Now! echoes State Superintendent John White: We still have a long way to go, but the improvement has been enormous!

Notes: 1   ACT composite scores are made up of the best score that each senior received, no matter when or how many times the student took the test. 2   In calculating the 2005 data, all high schools taken over by the Recovery School District are considered “RSD High Schools” for that year. OPSB schools were the five high schools that remained with the OPSB. 3   The four-year adjusted cohort graduation rate is the percent of first-time 9th graders who graduate in four years with a regular high school diploma. Students who enter 9th grade together for the first time form the cohort, which is then “adjusted” by adding any students who transfer into the cohort (through October 1 of the cohort’s junior year) and subtracting any students who transfer out, leave the state or country, or die. The graduation rate for that cohort is calculated by taking the number of students who graduate in four years and dividing that by the number of students in the adjusted cohort for the graduating class. By 2011, all but 3 states used this more rigorous calculation to measure graduation rates.